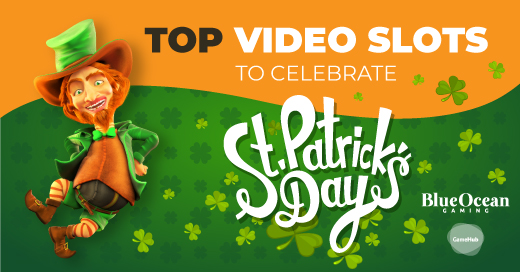 It is time for the celebration of Saint Patrick's Day, a cultural tradition that originates from Ireland and it is celebrated all over the world. This year due to the current situation all the parades are being cancelled or postponed.

However with a huge choice of Irish themed video slots you will be able to get your players into festive spirit of Saint Patrick's Day.

Here are our top 5 video slot picks to get everybody into the Saint Patrick's Day celebration mood:

Finn is back, and he’s madder than ever! After the huge success of NetEnt’s Finn and the Swirly Spin, Finn’s Golden Tavern sees the return of the unique spiral spin mechanic which has proved a hit with slot players from around the globe. This 5-reel, 5-row video slot that features a Wild Symbol, a Free Spins Chest, Free Spins with a multiplier meter and a coin bonus, and 2 different Random Features. So have a night our with Finn at his local tavern, try your luck with some swirly spins and see if he can give you the luck of the Irish.

Get ready to rock with rebellious Rainbow Ryan! Ryan, pint-sized superstar, jams perfectly in tune with the reels and bestows you the luck of the Irish with the game's main feature - synced reels. Ryan shreds some riffs any time in base game to make up to 6 reels synced. Even sweeter tunes wait for you in Free Spins, where you will have at least 2 synced reels every spin, with the chance to get more reels synced with every consecutive spin.

Leprechaun Goes Wild is a 5-reel video slot machine with 20 fixed paylines. The Wild symbol appears on all reels, substituting for all symbols except Scatter. Each reel features a different Wild Leprechaun. Luck of the Irish feature is activated when 2 Scatter symbols are visible.

Leprechauns can be real pranksters, but what they’re known for even more are their hidden pots of gold! Instead of paylines, all 16 reel fields are separate and wins are awarded for getting at least 8 identical symbols. Players can also block the position of symbols for the next spin in order to create the most favourable combinations. Larry has come up with a number of trials and obstacles that need to be completed in order to activate one of the special features and win its prize. Other than a Wild symbol, there are two coin symbols – silver and gold – and both of them are used to activate Free Spins Bonus and Leprechaun’s Bonus Spins respectively, each with their own set of rules.

Find the pot of gold in Leprechaun Song™, the 3×5, 20 lines videoslot. When the leprechaun sings, hit one of the random treasures at any spin – raining wilds, pick a prize and giant symbols. Hit the bonus rounds in multiple ways, as the leprechaun awards second chances.